The Dirty Game: My take on the Sports Illustrated series on the Oklahoma State Cowboy football program 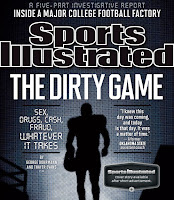 If you don't follow college football or of you're just living under a rock, then you have no idea what the above image is all about.  This past week Sports Illustrated ran a five-article series on the Oklahoma State Cowboys and their football program.  The articles allege pay-for-play for the players, academic misconduct, a culture of drugs, and sex provided for recruits.  Plenty of people (including an overwhelming majority of former players) have poked holes in the shoddy reporting and research, but strangely enough, I'm involved in the whole thing.

How?  Well, after the first article was released, I was flabbergasted. So I posted on the Oklahoma State University Facebook page: 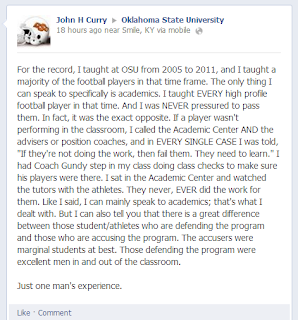 My life went CRAZYTOWN after that.  It wasn't ten minutes later, and I was contacted by OSU Communications asking if I would be willing to share my story.  I said yes, but I had no idea what that meant.

That night, I got some nice support for coming forward from the folks on the OrangePower message boards.

The next day I was contacted by the ABC, CBS, and NBC affiliates in Oklahoma City, the Daily Oklahoman, and the Sports Animal, the major sports talk radio station in OKC.  Everyone wanted to talk to me.  At first, I was fine with that, but I just felt unsettled about it.  I talked with my wife about it, and we decided that it was best not do to so.  So I responded to the requests thanking them for the opportunity and I sent a written statement that was a variation of the above post.  It read:

I taught at OSU from 2005 to 2011, and I taught a majority of the football players in that time frame. The only thing I can speak to specifically is academics. I taught the majority of the high profile football players in that time.  And I was NEVER pressured to pass them. I never heard of another faculty member being pressured to pass an athlete. In fact, it was the exact opposite. If a player wasn't performing in the classroom, I called the Academic Center AND the advisers or position coaches, and in EVERY SINGLE CASE I was told, "If they're not doing the work, then fail them. They need to learn." I worked closely with Terry Henley, and the article's characterization of him is not the same as mine.  I always found Terry to be very above board and expected rigor out of the student athletes. In addition, I had Coach Gundy step in my class doing class checks to make sure his players were there. I also observed in the Academic Center the tutors working with the athletes. They never, EVER did the work for them. Of the 50 or more players I taught and the numerous others I met, I never met anyone I would characterize as functionally illiterate.  In short, my experience was the exact opposite of the article's allegations.  My time working with those young men and that staff was just as academically rigorous as my time with non-student athletes.  I never saw athletes get special treatment.


After that decision, I felt much more settled, and as the requests came in, I just kept sending that email.

I grew up watching Linda Cavanaugh, and it was weird to hear her talking about me.  It would have been cooler if she could have pronounced my name correctly.  It's CURRY, Linda.  Like chicken CURRY. :)

The next time I saw myself quoted it wasn't actually about the SI series, but rather how the University was using social media to respond.

But the next day I was quoted in the Daily Oklahoman. I was also quoted in the International Business Times.  But it was KOCO Channel 5 who really surprised me:

A whole article just on my statement!  So that's everyone quoting me.  It seems crazy, but don't think I tried to make myself part of the story.  If you don't remember or if you don't read my blog (I don't post much, so that's fine), my time at Oklahoma State ended involuntarily.  I had people who could have spoken up for me (when I couldn't speak for myself), but they didn't.  I swore I'd never stay silent when I could speak for someone.  That's how I view this situation.  I could speak up, so I did.

My take on the articles?  I know nothing about players getting paid, but I find it hard to believe that no one knew about it.  Someone would have talked.  And if all the starters and stars of that era are coming out and saying they never saw it or heard of it, then it probably wasn't what was going on.  I'm not saying it didn't happen, but I think there would have at least been rumors.  As for the academic allegations, you can see my response above.  And what about the article on drugs? Some college students choose to take drugs.  Do I think the football program was lax like the article alleges?  Not in my experience with the athletes.  I saw many of them dismissed from the team for it.  What about the article alleging sex for players? Some gals chase jerseys.  But I don't think the program pimped out the Orange Pride girls.  I taught some of them, too, and they were fine young women.

I think the entire series of articles smacks of poor journalism and a lack of research.  It's too bad.  But I know that the Oklahoma State family will be okay, because that's what we do.  We keep riding.

GO POKES!  I might be living in Kentucky now, but I'm FOREVER ORANGE.